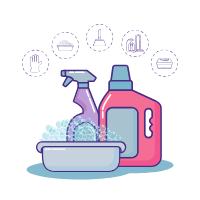 By the time you have finished reading this blog, we hope you will have a great understanding of how a cleaning service can help you to manage your home. While hiring professional cleaners may seem like an indulgence at first, we're sure you'll change your mind once you understand the many different ways they can assist you. Our amateur writers have produced articles detailing how a pro cleaner will tackle issues in the bathroom, kitchen, bedroom, and other spaces in a family home. So, what are you waiting for? Click on some of the links you see below and start your journey with us.

Understanding How a Cleaning Service Can Help You

Three Signs You Need to Call in a Mould Remediation Specialist

Mould is a fungus that can cause damage to your property and your health if it is allowed to grow in your home. The best way to get rid of it is to contact a mould remediation company, which will inspect your home, take action to remove the mould and then come up with a plan to prevent it in the future. But how can you tell if you have a problem in the first place? Here are some of the signs to look out for.

Not all mould looks the same. Many of us are familiar with black mould, which looks like a sooty deposit that often grows near windows. But mould can also appear as white patches as well as in dark-coloured rings or spots. You may mistake it for a bit of dirt or dust at first, but if it keeps returning, particularly if it is in a damp area, you may have a problem with mould. It is quite possible that there is a lot more mould than what you can see, so if you do find visible mould, you should not waste any time before having it investigated.

Another clear sign of a problem with mould is a damp or musty odour in your house. You may also detect a smell similar to mushrooms. This is caused by microbial volatile organic compounds, often shortened to MVAC. A musty odour is often the first sign of mould to be detected as the mould tends to grow in dark corners and behind kitchen appliances or furniture where it is not easily seen. A persistent damp smell in your home should never be ignored.

Condensation is a cause of mould rather than a symptom, but it is often easier to spot and is a clear sign that mould may be a problem. It is easy to see on cold glass and metal surfaces, but it can also form on furniture and soft furnishings where it will be much harder to detect. If you find condensation in your home, it is likely that mould will not be far behind, so you should have it investigated and cured as soon as possible.

The best way to deal with mould is to call in a mould remediation specialist who will find the cause of the mould, ensure it is completely removed and make sure it does not return.